Enough of you have been reading long enough to remember Jasper’s pregnancy and arrival so are probably just as befuddled by the fact he is now five. FIVE! Going to school next year. I mean, didn’t I just have him? 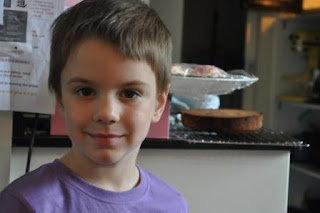 With not a grain of originality I thought I’d share with you five things about the mighty Jasper.

1. His favourite colour is pink.These are the buttercake w/ fresh strawberries mixed through (on his suggestion) topped with buttercream icing and sprinkles cupcakes he took to kindy on his birthday.

2. After a brief run of requesting penis cakes we were back to his favourite animal – the ladybird. At least we didn’t have to revisit Scary Thomas the Effing Engine this year. 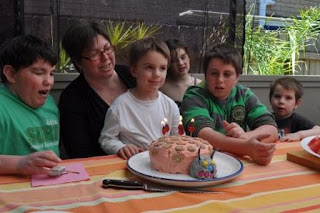 3. This child of contradiction. Fiercely independent but always in need of a snuggle. My all singing, all dancing jazz-hands Jasper who has a pretty short fuse and will happily thump a brother, hard, if they annoy him/look at him/touch him/touch his stuff. A ray of sunshine full of stories and laughter with a flip-side of contemplation and serious silences. 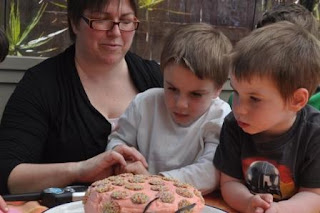 4. He still adores trains. These last two days he has spent way too long on YouTube watching clips of model trains. He has moved on from Thomas the Effing Engine and The Polar Express has not been on in the house for about a month (gasp!) but the ending of Back to the Future III is getting a lot of airplay and while I can only endorse the original Back to the Future I can understand the love of a) a train that explodes and b) a train that flies.

5. After years dedicated to the white, the off-white, the beige, the taupe diet Jasper has decided that maybe other foodstuffs are worth investigating. It’s not game on as such but dudes, it’s progress. 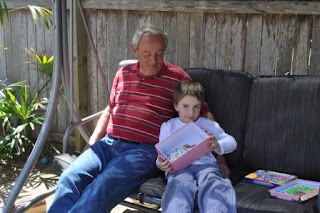 Here he is with one of his presents – a pink treasure box full of pirate treasures – gold coins, rubies, diamonds and the rest (from his cousins) and his Grandpa, Chef’s Dad. There is something infectious about how family is the world to children. It makes you re-evaluate your priorities don’t you think? These holidays just gone Jasper went to my Dad and Stepmother’s on his own for the first time. He stayed for two nights and was dirty with me when I arrived to pick him up because he wanted to stay longer. He will often request a phone call to Nana and Grandpa to arrange a day – on.his.own – with them and this warms my heart.

And that I think is the biggest thing about the Mighty Jasper. When he arrived he changed the whole dynamic of our family. He brought us all together in the pure love and joy that is so unique to a newborn baby. We called him our ray of sunshine and Felix once tearily said to me, ‘I love him so much I don’t know what to do with it’.

On our recent sojourn at K’s there was a brief moment one afternoon when Jasper wanted me to lie down with him. He told me that he wanted a sister too and in fact wanted four of them. I laughed gently and told him that was not going to happen and oh, the real tears that he cried. It reminded me that Felix was five when I fell pregnant with Jasper and that I can’t believe another five years have passed.

Happy birthday my beautiful boy, may the world always be as wondrous to you as you make ours.